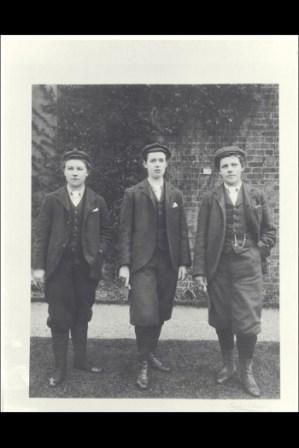 This Saturday is International Women's Day and I thought this was a great opportunity to celebrate some magnificent women in horticulture. And where better to start than with Gertrude Jekyll who designed the planting in the formal gardens at Hestercombe.

Gertrude was born in 1843 and died in 1932. She had a very artisic start in life and her skills included painting, silverwork and embroidery. When her eyesight deteriorated she didn't give up but in a sense got a larger canvas. She started to design and build gardens. She didn't stop there she became one of the most sought after gardener designers of the time, she ran her own plant nursery- she even forged her own tools which was really quite something at that time. She wrote books on horticulture and was revolutionary to garden design.

Kew didn't have it's first female gardeners until 1896. It caused quite a stir and they were known in the press as 'Kewriosities'. The first problem Kew had to worry about was what was appropriate for these women to wear and there are some great pictures of women in knee length breeches.

Of course some women had gardened at home prior to this but not so publicly and not through study. There have always been 'weeding women'. These were poorly paid lower class female workers who weeded the fields, but it was not seen as a befitting job for a 'lady'. And that was the difference- horticulture was opening its doors to educated women.

The war effort bought females forward to help in farming as land girls and I feel that after this women proved their strength and their use on the land. There was no turning back!

But what a turn around in a short amount of time. Switch on the TV now and there are a host of knowledgeable female horticulturalists- Carole Klein, Rachel De Thame, Alys Fowler, Sarah Raven and Christine Walkden.

And where would horticulture be if it wasn't for a few fantastic females- Valerie Finnis, Vita Sackville-west, Penelope Hobhouse, Jekka McVicar, Majorie Fish, Beth Chatto to name a few.

Women have well and truly gained respect in horticulture and forged some impressive careers.

Locally at Barrington Court, Tintinhull, Montacute, and of course here, we have female head gardeners. Hestercombe's team of 6 gardeners is split equally of men and women, but both our students this year are female.

It's great stuff. Luckily for me I have grown up believing that I could do or be what I wanted, regardless of my sex but for many it must have been/must be a constant struggle. It is great that women are being embrassed by horticulture and lets hope it spreads to other industries.