Over the last couple of years, the area of lawn outside the Bampfylde Hall has become damaged. This damage was caused by an electric buggy being driven repeatedly over the edge of the lawn. The route for the buggy has since been changed and a tough matting has been put down which should allow the grass to grow up through despite being driven over. However, the damage to the Bampfylde lawn still needed to be repaired. 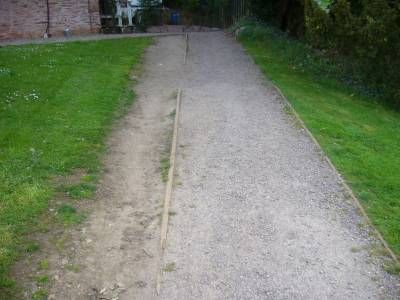 First of all, Claire mowed the lawn. This is because once we have reseeded the damaged area with grass seed we will not be able to mow again until the grass has established. I forked over the area of compacted ground where the grass had died out. You might be able to see from the photo that a shallow channel had been worn away, so the soil level needed to be brought up so that the lawn would be smooth and easy to mow. If the compacted ground had not been forked over, the new topsoil put on top would not knit in with the compacted soil and as a result the topsoil might have just washed away. 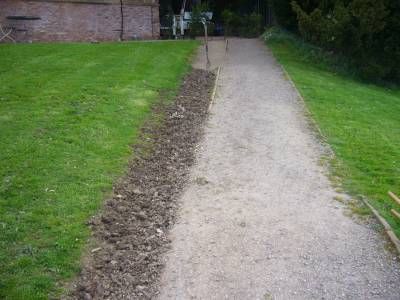 The next stage was to compact the fluffy soil again by treading it down! I know this sounds silly because I have just said we needed to relieve the compaction, but grass seed needs a firm bed of soil on which to germinate. If we he had sown directly onto the forked over soil, the result would have been patchy and uneven. So we shuffled over the soil on the balls of our feet to level out the surface and break up any clods of earth.

The topsoil was then added at this stage, and it is surprising how much you need. We probably used a good half a trailer load of topsoil on this small area. We removed any large stones and crumbled up any big lumps before tipping the topsoil onto the damaged area. This was then leveled using a landscape rake to get a smooth finish.

The topsoil was a little too damp to tread down again, so we stood on wooden boards to firm the topsoil down. This allowed us to see any humps or dips which required re-leveling. When we were happy that the soil was level we could then add the grass seed. The packet of lawn seed will usually give you directions as to how much seed to spread over a certain area, but as a general rule a good handful will cover a square meter. We do have a small spreading machine that can be used to broadcast seed over a large area, but for a small strip like this it was easier to do it by hand. Overseed into the grassy area too, as this will avoid any gaps when the seed germinates.

Once seeded, we then pressed the seed gently into the soil using the wooden boards again. Alternatively you can gently tickle the seed into the topsoil by lightly raking. If rain is expected, let nature water the grass seed in for you. Otherwise you may need to water regularly until the grass gets established. 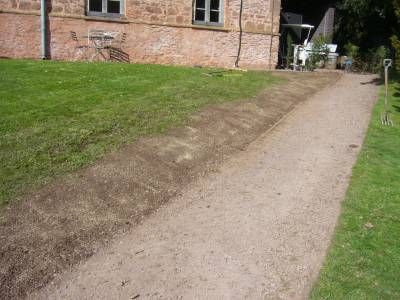 Elsewhere in the gardens we have begun the 'summer jobs' such as weeding, mowing, edging and strimming. If you are visiting, look out for these lovely spring flowers: 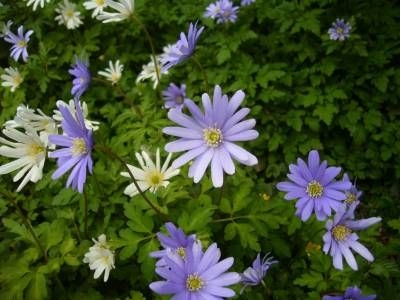 Above: Anemone blanda (windflower) in the Shrubbery. 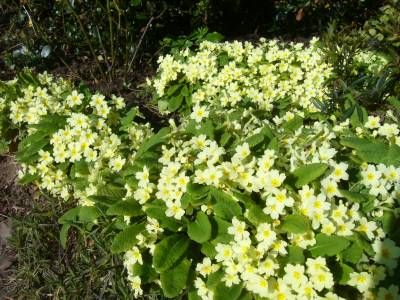 Above: Primula vulgaris (primrose) on the West Rill.