This week I have been getting quite strange looks from visitors. After a year or two of propagating plants we are ready to start following Jekyll's plan of planting up the walls around the plat. Lutyens and Jekyll had such a strong working relationship that Lutyens has built the walls and left gaps specifically for Jekyll to plant into. So the vertical living walls that are fashionable now are not necessarily a new thing.

Above is Patrick Blancs living wall in Madrid and below is The Driver in Kings Cross. 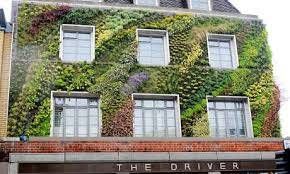 Jekyll's plan is not quite as intense as this. She repeats plants seen elsewhere in the garden for uniformity such as Lavenders, Olearias, Nepetas, Rosemaries but she also adds Asphodelines, Campanulas and Phlox. I have also been reading her book 'Walls and water' where she talks about adding annuals into the walls and so I have added white snapdragons in places to.

The experiment at the moment is to see which type of plants establish the easiest, so we have tried seed mixed with moist soil and pushing that into the holes, planting in young cuttings/seedlings with established roots, and planting more mature plants. In theory the more mature plant has the greater ability to support itself but actually may require more watering so that it doesn't dry out. A younger rooted cutting may be able to adjust to its new conditions more quickly. 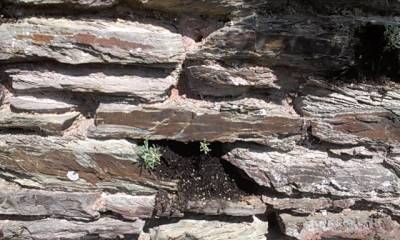 YOUNG SANTOLINA CUTTINGS IN THE WALL 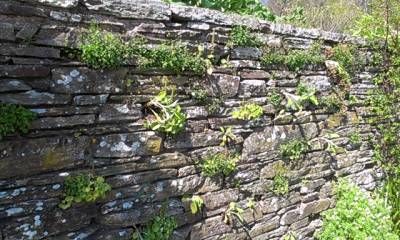 FOXGLOVES AND ANTIRRHINUMS IN THE WALLS

MATURE LAVENDERS IN THE WALL 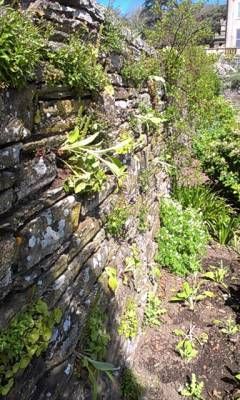 The problem with wall planting is getting moisture to the plants, obviously the walls are very dry. I have packed the plantings with moist soil to almost create their own habitat and then whilst they are still new I am misting them with a hand held sprayer. I fear that a hose pipe may well just blast them out of the walls!

Some of the more mature plants look a bit daft to start with as they stick out horizontally from the wall- and I think that is why I was getting such funny looks!

Luckily plants are phototropic (grow towards the light)and within 4 days these foxgloves had started to tilt their growth back up vertically towards the sunlight.

The next problem we may face is that the roots of the plants become so large that they start to blow the wall out. If this happens we may have to manage the situation by constantly producing new plants to replace old plants before they get too large.

So all in all it's a pretty good challenge for us gardeners and I look forward to seeing how it works out.